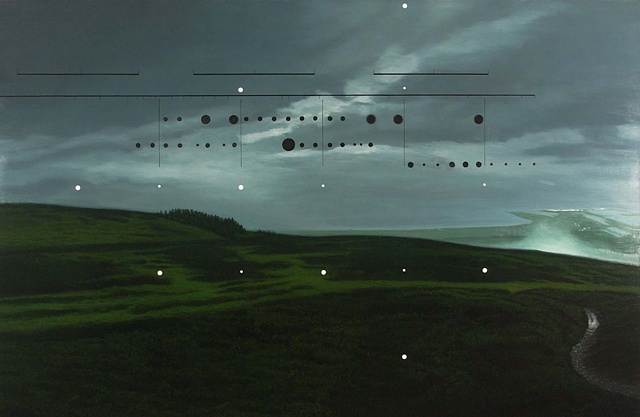 Don Pollack, "Mysterious Island," at Perimeter Gallery "The very act of creating a landscape," reads Don Pollack's artist statement, "can soon find itself occupying he space it seeks to frame." In other words: How can one accurately capture a landscape on canvas without acknowledging one's personal connection with it? For Pollack, the solution is to add conceptually to the canvas what he sees visually in nature. His paintings are both realistic and sharp, with gleans of fantasy or glints of imagination brushing against the surface. And for this latest collection of works, most of which were done in the last year or so, that added layer of imagination is rooted in music. Pollack has carefully painted musical staffs, notes, rests and dynamical markings — pianissimo (pp), fortissimo (ff), et cetera — into the skies and meadows of his landscapes. And, oddly, they don't look all that out of place. In one depiction of a glen, there's a little half-rest hiding among the treetops. In another, a perfectly scripted G-clef, so familiar on sheets of music, is painted upside down in Pollack's pale blue sky, as if someone up there were reading a score. It works visually, but the scientific evidence is what makes it exciting. "Scientists," Pollack enlightens us in his statement, "have proven that sounds generated deep inside the Sun cause the Earth to shake and vibrate in sympathy." Furthermore, he writes, this year the European Space Agency announced that the Earth's magnetic field, atmosphere and even voltages induced on ocean cables, are all taking part in a "cosmic singalong." Sounds resembling musical notes have been detected coming from the Perseus cluster of galaxies. A 2.5 billion-year-old black hole emanates a sound wave that matches the key of B flat. And just like that, Pollack's islands and landscapes — painted carefully with musical notes, rests and dynamic direction in their shrubs, trees and rivers — sing from their canvases in chorus. Don Pollack, "Mysterious Island," at Perimeter Gallery, 210 W. Superior St., 312-266-9473; perimetergallery.com. Through March 13.